Back Relieves Peters as Commander of NSWC PCD 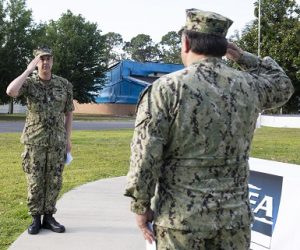 During the ceremony, Peters passed his command pin to Back as a symbol of camaraderie to begin a tradition for commanders of NSWC PCD.

At the conclusion of the ceremony Peters, who was an all-state wrestler from Ohio and a wrestler for U.S. Naval Academy removed his boots, a time honored tradition for wrestlers retiring from competition.

After leading the command through Category 5 Hurricane Michael and the rebuilding process, and now through the COVID-19 pandemic, Peters will retire without the fanfare typically afforded a Navy leader after more than three decades in service to the nation.

â€śIt has been an honor to serve this command as their leader during these great times of change. I cannot express enough how proud I am of the people within this organization,â€ť said Peters. â€śThey have stepped up to the plate at every opportunity while maintaining strength during all of the adversity. I am proud to have been able to support during times such as these.â€ť

Ashore, Back served at the Naval Surface Warfare Officers School as an air defense, operations and naval tactical planning instructor. He spent a year as a brigade electronic warfare officer with the 213th Area Support Group (Army National Guard) in Balad, Iraq. His first acquisition tour was as the principal assistant program manager for Aegis Fleet Support (PEO IWS IFR).

A native of Livermore, California, Back is a 1995 graduate of Stanford University (NROTC Program) with a Bachelor of Arts degree in English. Back also has a Master of Science degree in Modeling, Virtual Environments, and Simulations from the Naval Postgraduate School.

Back said, â€śI am honored to assume command of NSWC PCD, and I will continue the outstanding efforts of Capt. Peters with this organization. I am looking forward to working with the talented and dedicated Panama City team.â€ť