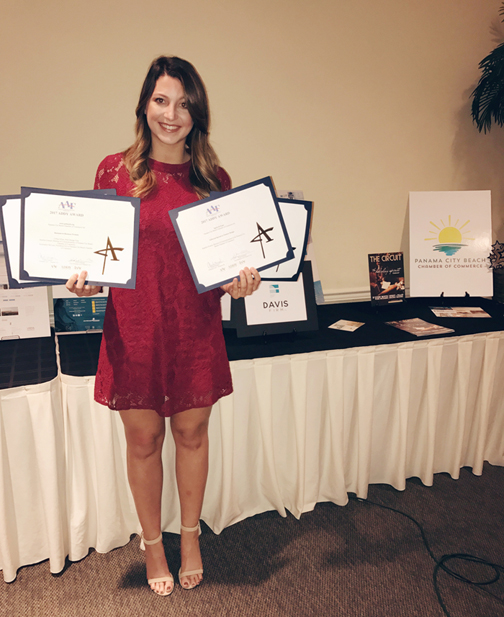 On Thursday, March 16, 2017, the Panama City Beach Chamber of Commerce was presented four awards at the local ADDYs Gala, American Advertising Federation (AAF) Awards Dinner, at The Palms Conference Center. The Beach Chamber was awarded four Gold ADDYs for every piece of creative work they submitted, in recognition of its exceptional advertising efforts in 2016.

The American Advertising Awards is the advertising industry’s largest and most representative competition, attracting over 40,000 entries every year in local AAF Club competitions. The mission of the American Advertising Awards competition is to recognize and reward the creative spirit of excellence in the art of advertising. Selection of the most creative entry in each category is affected by a scoring process in which a panel of judges evaluates all creative dimensions of every entry. A GOLD ADDY is recognition of the highest level of creative excellence and is judged to be superior to all other entries in the category. Entries that are also considered outstanding and worthy of recognition receive a SILVER ADDY. The number of awards given in each category is determined by the judges, based on the relative quality of work in that category. The local ADDY Awards is hosted by the American Advertising Federation of Panama City every year.

As a benefit to our membership, the Beach Chamber will always strive for excellence in all of our marketing materials. Being recognized for these accomplishments is an honor and we are truly grateful for being an award-winning Chamber.