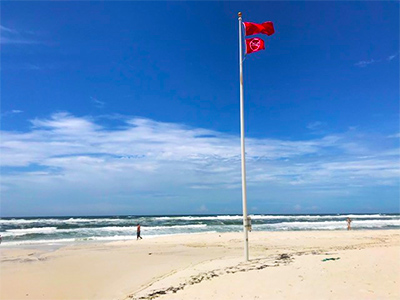 The Panama City Beach City Council recently approved new regulations strengthening the enforcement of the beach safety flag system. When double red flags fly, swimmers who refuse an order to leave the Gulf of Mexico may be subject to fines and arrest.

The new ordinance, adopted August 8 and effective immediately, empowers the Fire Department to impose fines up to $500 while the Police Department has the additional power to arrest those refusing to leave the water. These penalties are similar to rules in place on unincorporated Bay County beaches.

To better inform visitors of the dangers of the Gulf of Mexico during hazardous conditions, beginning in 2020, beach businesses must post signs during double red flags stating that the water is closed to the public.
Although the penalties for refusing to leave the water during double red flags are slightly different for police and fire, both departments as a first offense will verbally warn swimmers and give them an opportunity to comply before imposing harsher penalties. Once the initial warning is ignored, a police officer can issue a misdemeanor citation punishable by a fine of up to $500, and/or up to 60 days in jail for a second offense. A second offense issued by fire rescue results in a fine up to $250 and a third offense results in a $500 fine.

Beach businesses are required to post a two-sided sign during double red flags. These signs should state: “Water closed to public. Entry into Gulf of Mexico punishable by arrest. Section 7-12, PCB Code of Ord.”
These new signs will join existing rules requiring beach businesses to either lifeguard their beaches or post signs explaining the absence of lifeguards, the beach warning system, and the dangers of rip currents.
Beginning Oct. 1 beach safety services are being consolidated under the Fire Rescue Department. Lifeguards stationed at Russell-Fields City Pier are currently under Parks and Recreation and Beach and Surf are currently under the Police Department. To supplement beach rescue services, more than a dozen firefighters are training to be open-water certified lifeguards.