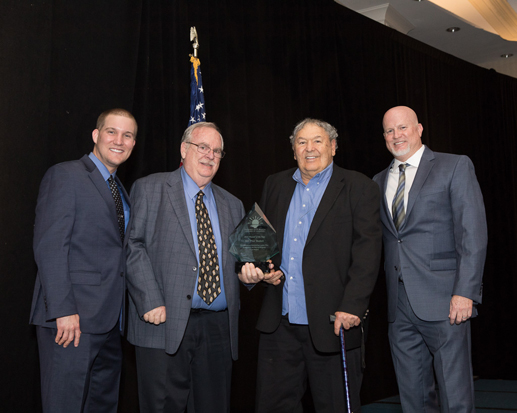 This prestigious event recognized local citizens for their dedication and accomplishments in both the community and the Beach Chamber. These awards included the Pioneer of the Year, Humanitarian of the Year, Ambassador of the Year, Business Excellence Award, Young Professional of the Year, and a dedication to the Chamber’s 2017 Chairman.

The Past Chairman’s Award honored 2017 Chairman of the Board, Ryan Davis of Capital City Bank, for his dedicated service and commitment to leading the Beach Chamber.

This year’s Young Professional of the Year Award went to the Commercial Lines Producer of Peoples First Insurance, Maria Wilson, whose commitment to her role as a young professional in our community has made a difference in the Beach Chamber.

This year’s Ambassador of the Year Award winner, Jeremy Hinton of Innovations Federal Credit Union, is that and more. Whether it is representing the Beach Chamber at Ribbon Cuttings and Grand Openings, or attending Chamber networking events, he goes above and beyond as an Ambassador. He is a valuable asset to not only the Beach Chamber, but also the community.

Larry Thompson of Grand Slam Sports Tournaments won the Business Excellence Award for his outstanding performance through growth and contributions to both the community and the Beach Chamber.

The Humanitarian of the Year award was given to Ric and Bobbie Brigman with Food4Kidz for their generosity and commitment to helping those less privileged in our community, especially children.

A Pioneer initiates, takes the lead, prepares the way, and participates in the development of a region. This year’s Pioneer of the Year Award was given to Bill “Pine” Buskell of Pineapple Willy’s and Wicked Wheel, whose contributions to our community have helped accomplish much success in our area.

The Panama City Beach Chamber of Commerce would like to congratulate all the award winners and thank everyone who attended this year’s Annual Awards Dinner.