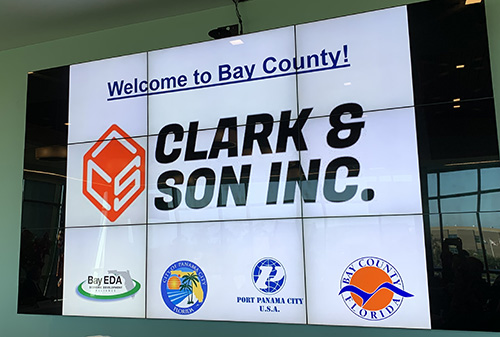 The Bay Economic Development Alliance (BayEDA), Port Panama City, City of Panama City, and Bay County announced today that a leading distribution company for custom kitchen cabinets will be locating in Panama City, Florida. Clark and Son Inc. (Clark and Son) will locate their distribution and final assembly headquarters operation in Panama City, Florida. Clark and Son completed a search throughout the United States for this new facility. Clark and Son have formed a joint venture with Wood Genix, a world leader in cabinet manufacturing. Through the partnership they are locating a new production facility in Merida, Mexico. The first 290,000 sq. ft. manufacturing facility will be fully operational in three weeks. In Mexico, the company is also in the process of constructing an additional 500,000 sq. ft. production facility to add the remainder of the manufacturing lines.

Through this partnership, Clark and Son will import its products through Port Panama City and distribute nationwide through their logistics center in Panama City. Clark and Son estimates that they will begin shipping product through Port Panama City and to the new facility within 4 weeks. Once both production facilities are completed in Merida, it is estimated that the inbound container traffic from Mexico to Port Panama City could increase by 20%. Due to this increase in container traffic, the economic impact to Bay County and our region will be significant due to the multiplier effect from maritime related jobs.

For their logistics and distribution facility, Clark and Son, Inc. will be leasing a 100,000 sq. ft. existing facility in Port Panama City’s Intermodal Distribution Center. The project represents an investment of $5 million and will bring approximately 50 new logistics and distribution jobs to Bay County. The average wage for the new jobs will be $45,000. At the facility, the company will complete nationwide distribution to its growing customer base, sub-assembly of cabinets, and regional distribution directly to contractors and installers. For their products, Clark and Son completes private labeling and distribution of cabinets to their customer base including 84 Lumber, Surplus Warehouse, and many others. To service the regional customer base of Bay County, Clark and Son will also be investing in a retail and design showroom where wholesale flooring, cabinets, hardware, backsplashes, and other associated building materials can be purchased.

Termed “Project Diego”, the relationship between BayEDA, Port Panama City, and Clark and Son, Inc. was established through the ‘Sister City’ partnership with Merida, Mexico and the ‘Sister Port’ partnership with the Port of Progresso located in the Yucatan of Mexico. Company leadership became familiar with Panama City through these combined efforts and through recent economic development projects that have located in Bay County, Florida. Due to these relationships, this is the second economic development project that has invested in Bay County from Merida, Mexico.

According to Clark Jay Barkheimer, President, Clark and Son, “In Bay County, Florida, we found the assets and the community to support our growing business. Through our strategic partnership with Wood Genix in Merida, Mexico, we had a need to find a community and a port that was willing to work hand in hand with our company. In Bay County and through Port Panama City, we found those partners. Because of the commitment from the workforce partners and educational partners in the community we are eager to get the hiring and training process underway.
Sandy Sims, Chairman of the Bay Economic Development Alliance and Director of External Relations of Gulf Power stated, “We are pleased to partner with Port Panama City and our local units of governments to attract this great company to Bay County. This project further diversifies our local economy and has a major impact to the growth of the container traffic coming through Port Panama City. This project represents the creation of 48 quality jobs in our region, but also supports the Port and its partners through increased activity.”

Wayne Stubbs, Executive Director of Port Panama City, has been instrumental through the progression of this project. “Having Clark and Son select Bay County for this project further solidifies the investment decisions made by the Port Authority Board of Directors. One of our major focuses over the last several years has been to expand the local economic benefits of our container trade with Mexico by attracting related distribution services to the Port’s Intermodal Distribution Center. This project would not have been possible without the foresight of our Board Members. The investment and location decision made by Clark and Son positions the Port to continue growing as the premier port for the U.S.- Mexico Trade in the Gulf.”

The City of Panama City has been involved in the progression of this project. According to Greg Brudnicki, Mayor of Panama City, “This new business, Clark and Son, Inc., provides our citizens of Panama City with one more option for a quality career in our City. This project helps keep our talented workforce in the area with high paying jobs. The project also capitalizes on the investments made by the Port Authority over the last several years and solidifies their position as a quality and sustainable Port. This project will be a boom to the container traffic through Port Panama City and the partners that serve our Port. We look forward to welcoming this new company into Panama City and making sure they have everything they need to be successful in our community.”

Bay County Commissioner, Tommy Hamm had high remarks for the announcement of Clark and Son, Inc. within Bay County. Commissioner Hamm stated, “This project is a huge win for our community because of the many indirect jobs it will support because of its container traffic coming through our Port. We look forward to welcoming the new company to Bay County and supporting them throughout their entire project and once they become fully operational.”

As we welcome Clark and Son to our community, CareerSource Gulf Coast is actively recruiting talent to join their organization. Anyone who has experience or interest in the following— Computer-Aided Design (CAD)/kitchen design, sales, truck driving and forklift operating—is encouraged to contact CareerSource at [email protected] More information about all available positions on their website at www.careersourcegc.com.