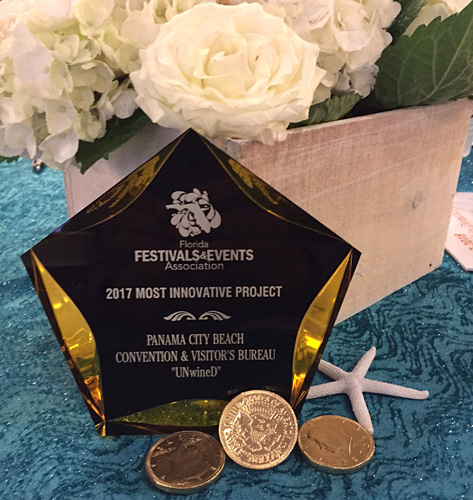 Visit Panama City Beach and the Bay County Tourist Development Council received five Sunsational Awards from the Florida Festivals & Events Association (FFEA), including the grand prize for āMost Innovative Project of the Yearā with UNwineD, a two-day festival which took place this past March.

Additionally, the destination picked up 1st place for its promotional UNwineD T-shirt, 2nd place awards for Public Relations Campaign for Beach Home for the Holidays and an advertising Billboard for Pirates of the High Seas Fest and 3rd place for its Mardi Gras Event Guide.

For the past 23 years, the Florida Festivals and Events Association has celebrated membersā achievements in event innovation through the Sunsational Awards. This year, the organization had a record number of more than 400 submissions. Patrick Stewart, Special Events Coordinator, accepted the awards on behalf of Visit Panama City Beach.

āFor the 2017 spring season, we continued our efforts to create innovative events that would attract different audiences to Panama City Beach, states Visit Panama City Beach Vice President of Marketing Jayna Leach. āOur team worked tirelessly from the strategy to the execution and I am so proud that we were recognized among our peers from all over the state. A special thanks is in order for the event staff of Visit Panama City Beach. It was because of their hard work and dedication throughout the event planning process we were so successful.ā

UNwineD took place March 24-25, 2017 at Aaron Bessant Park and featured craft beer, spirits and wine from around the world, culinary creations by the regionās leading chefs, a Southern garden party presented in partnership with Garden & Gun magazine and a live musical performance by Grammy-nominated American folk-rock band, The Avett Brothers. As a result of UNwineD and other new events such as the Emerald Coast Boat & Lifestyle Show and Emerald Coast Cruizin, Panama City Beachās collections were up 19.2 percent compared to March 2016.