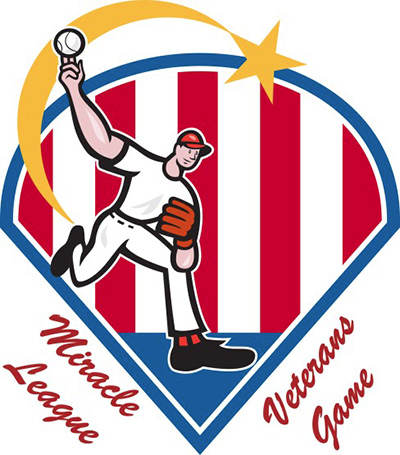 The Rotary Club of the Emerald Coast will host the 16th Miracle League Veterans Game on Wednesday November 6, 2019 where 30 of our American Heroes and Veterans from the Chester Sims Veterans Nursing Home will come to the Miracle League Field at Frank Brown Park for their semi-annual ’Fall Classic’ Baseball Game. This includes a variety of veterans who served in WWII, Korea, and Vietnam. Some will be returning players while others will make their first appearance and trip around the bases in this one inning game. These veterans (men & women) represent all branches of service including the Army, Air Force, Navy, Marines, and even the Coast Guard.
Frank Brown Park rolls out the ‘green carpet’ for the veterans who arrive in First Class style in a luxury bus ride with a full escort from the Panama City Beach Police and Bay County Sheriff’s Department. The motorcade is led into the park by a horse & rider carrying the American Flag. Upon their arrival they are greeted with a Flag Line of patriotic fans and supporters who cheer them on as they make their way to the ball field. Many of them then become ‘Buddies’ to help the players around the field. All are welcome and encouraged to attend and admission is free!

During the introductions of the ‘starting lineups’ , a game medal will be placed around each of the player’s necks. Tyndall AFB Honor Guard will ‘Present the Colors’ and Neysa Wilkins will sing our National Anthem and then lead the troops with a group sing-a-long of God Bless America.

There will be a bittersweet moment as the new ‘Angels in the Outfield’ , Sims Veterans who have played there but since passed away, are recognized with a red, white or blue ribbon with their name, branch and theater of service written on them hung on a specially built flagpole for the occasion. These ‘Angels in the Outfield” are then placed in the centerfield where they wave gently in the breeze during the game. There are presently 118 Angels among us.

Every game starts with a ‘First Pitch’ and for this game, Maxine Mann, a WWII Flight Instructor, will throw the first pitch in honor of her former roommate, and now Angel, Jenny Lynes. This will be Maxine’s 9th Veterans Game as she closes in on the record of 12 held my Mike Mancos. Tom Kane, US Navy – Vietnam, will be the game pitcher of this one inning ‘all hitter’.

This game will also debut the veterans in their new game jerseys! There will be a blue and red team featuring Team USA! The jerseys were made possible by generous donations from the Lynes family in memory of Jenny, and others.

There have been 186 players in the 15 games since this event was started in the fall of 2011; 81 served in WWII, 35 Korea, 54 Vietnam, 8 Korea & Vietnam, 2 WWII and Korea and even 3 who served in WWII, Korea and Vietnam! Rotary Youth Exchange student, Clea Brunel from France, will give each of the WWII Veterans a French flag in thanks.

Due to the popularity of this event among the veterans, there is a “Spring Training Game” and “Fall Classic” in April and November every year. The event wraps up with a group picture and picnic lunch provided by Wicked Wheel and Domino’s Pizza with treats from the Publix Bakery and Culvers!