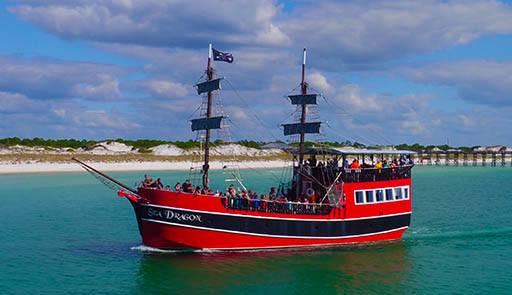 This Columbus Day weekend, Panama City Beach invites kids of all ages to find their sea legs and join in the celebrations of the 2019 Pirates of the High Seas Fest. From Friday, October 11 through Sunday, October 13, this year’s annual festival will bring swashbuckling adventures to the destination, including a pirate invasion and battle, a magic show, storytelling, live music, fireworks and more. Kids won’t want to miss Friday night’s Treasure Drop that includes over 8,000 gold and jewel colored beach balls dropped from nets stretched over the street of Pier Park.

“Panama City Beach’s Pirates of the High Seas Fest is one of our most fun and unique fall events, and Columbus Day weekend is the perfect time for a beach getaway,” shares Dan Rowe, president and CEO of Visit Panama City Beach. “With an action-packed schedule full of free, unforgettable pirate-themed events for the entire family, Pirates Fest is a yearly favorite for locals and visitors alike.”

Celebrating the legacy of the pirates who used to roam the Gulf of Mexico and pillage the Emerald Coast, this one-of-a-kind festival tells the tale of Dominique Youx and his krewe of loyal buccaneers through staged pirate battles and storytelling. Attendees will learn of the old legend that claims these mighty men fought to defend Panama City Beach from invaders who wanted to steal the destination’s jewels in the early 1800s. Please see the complete list of events below and be careful not to walk the plank this holiday weekend.

•5:30 p.m.- Kid’s Parade, Pier Park
Children fill the available floats and parade down the streets of Pier Park, tossing out beads and other pirate treasure. Space is limited.

•6:15 p.m.- Opening Ceremonies & Treasure Drop, Center Stage
The opening ceremonies will feature a dramatic reading of the Legend of Dominique Youx by the Pirates of the Emerald Coast Theatre Company, followed by Conch Sounding and the Treasure Drop, when thousands of gold and jewel colored beach balls are released from nets stretched above the crowd.

•6:30 p.m.- Pirate Crawl & Second Line Parade
All are invited to dress up and join the Second Line parade, which will end at Celebration Stage.

•8 p.m.- Live Music: Trop Rock Junkies, Celebration Stage
One of the best beach bands in the country, the Trop Rock Junkies will perform as the Second Line Parade winds through Pier Park in a colorful Mardi Gras style celebration.

•9:15 p.m.- Fireworks Show, Russell-Fields Pier
A stunning firework show from the City Pier is sure to excite the entire family.

Saturday, October 12
•8 a.m.- Pirates of the High Seas Fest 5k Run/Walk, Frank Brown Park
Families are invited to run, jog, walk or waddle and bonus points if they wear their pirate costume! There will be an adult and children’s costume contest as well as a one-mile family run. Race day registration and pre-registration packet pick up will open at 6:30 a.m.

•12-8 p.m.- Festival Village & Little Pirates Fun Zone, Grand Theatre Plaza
A full day of fun gives children the chance to show their swagger with fun pirate-themed activities and entertainment. Pirates and mermaids will be leading activities, and temporary pirate tattoos will be available.

•12 p.m.- Live Music: Tusk, the Music of Fleetwood Mac, Celebration Stage
Kids won’t want to miss this chance to show off their moves and do a little boogie.

•1:30 p.m.- Commodore Mayhem Magic Show, Celebration Stage
Kids of all ages will be amazed at this unique magic show.

•8:30 p.m.- Fireworks, Russel-Fields Pier
All pirates are invited to return for a second night of breathtaking fireworks, once again launched over the beach from the City Pier.

•1:15 p.m.- Storytelling: The Legend of Dominique Youx, Main Stage
Pirates will descend onto the Main Stage as the grand legend of Panama City Beach’s very own pirate is shared with the audience.

Exact times are subject to change. Attendance is free for all the events mentioned above. For more information about Pirate’s Fest, visit www.visitpanamacitybeach.com/piratesofthehighseas.