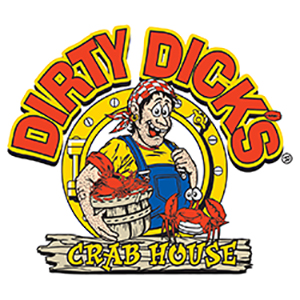 Ken Hersey is the founder of Dirty Dick’s Crab House with his partners, Beany Macgregor and Jack Frestel. It has been a busy year for the Dirty Dick’s Crew, opening up a new Nags head location (site of the old Slammin’Sammy’s) and the Big news is they ended their lease in Avon NC and have just completed construction of a beautiful new Restaurant! (That means no more dining in a tent in the hot OBX Summer!)

Dirty Dick’s Crab House is the Brain Child of Northern Virginia Native Ken Hersey. Ken had a longtime career as a building Builder/Developer in the Washington, D.C. area, but during a vacation to the Outer Banks in North Carolina he had an idea. “Crabs are a summer tradition in the D.C. and Maryland area but in the Outer Banks there was no local market for them. I thought, tongue in cheek, that ‘One day I’ll come here and open a crab house.’ I told my friend, Dick, ‘Wouldn’t it be funny to open a crab house and call it Dirty Dick’s Crab House?’ I sat on that idea for 25 years.”

In 1995 Hersey decided he wanted a career other than contracting, so with a handful of dollar bills in his pocket, he moved to Kill Devil Hills, rented a small room over someone’s garage, and opened his crab shack. It was a small carry out on the beach road @ mile post 9. By April of that year it was nearly ready to open. Ken has a knack for retail merchandising and this little few hundred sq.ft store had people buzzing. People were knocking on the windows to see if they could buy the t-shirts he had creatively displayed in the windows before we even opened for business. “We sold bushels of crabs and pounds of shrimp and these T-shirts, and the shirts took off!” Hersey said.

With the success of this Carry out, Ken decided that sit down restaurant is what was needed. He scoured the OBX for an available restaurant location and found a perfect spot in Avon. It wasn’t very big, but it had everything he needed, even an apartment upstairs! Being small, He had to have a place to sell the increasingly famous “I got my crabs from Dirty Dick’s ) T-shirts and assortment of Dirty Dick’s merchandise. He decided to have a specially designed retail shed built to showcase and sell the merchandise. This proved to be highly successful and was soon selling hats and t-shirts to everybody who visited the Avon Pier.

This restaurant was becoming so popular, that is was not unusual to have customers in line for over an hour waiting to get in. Something had to be done; so they built the covered patio seating area off the back. This seating area met with some mixed reviews but it sure beat waiting an hour to get in.

The Concept was working! Great seafood, served fresh, and with just a little bit of risque’ had a place at the OBX , so when a more than 200-seat restaurant became available in Kill Devil Hills, Hersey took it. That was in 2001, and that’s also when Beany Macgregor joined the Dirty Dick’s partnership. Macgregor, a New Orleans native, with a face that may be familiar to some of you as he had many guest Chef appearances on Network Morning shows such as Regis and Cathy Lee. He has also had much experience opening new restaurants: he launched 87 Planet Hollywoods in 27 countries; So if you see him at one of our locations, I’m sure he has some stories to tell about rubbing elbows with the STARS! Having multiple locations is much trickier than running a small carryout, so Jack Frestel brings his own unique business experience: he was the senior vice-president at U.S. Airways. So with business experts on board, the Kill Devil Hills location flourished. Since then they have opened a Dirty Dick’s in Panama City Beach, FL.

“We have a funny name and a great business,” he said. “We have a risque little name, but we hardly ever get complaints about it. We might do 1,000 covers a night in Panama City, and 250 of them will be children.” Families are welcome at Dirty Dick’s, and children get their meals served on Frisbees they get to keep. An especially popular children’s beverage, Hersey said, is the Shark Attack where a small vial of grenadine is attached to a cup of Seven-Up. Children dump the grenadine in the soda and watch the red “blood” spread throughout the drink.