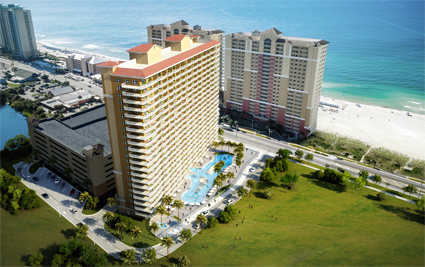 “Our structural engineer team at Genesis Engineering Group reported that the building’s primary structural integrity was thankfully not impacted by the storm,” said Stan Hammack, senior vice president of operations for Killian Construction Co. “The on-site tower cranes were also certified to be released for work, and we have been in communication with the construction department for Panama City Beach to keep them apprised of our intention to resume work on the structure.”

On Tuesday, Oct. 9, all on-site construction on Calypso Tower lll ceased in preparation for Hurricane Michael, which made landfall in the Florida Panhandle on Wednesday, Oct. 10. A hurricane preparedness plan was set in place for the active construction site more than 48 hours in advance of the storm making landfall.

Upon inspection by local architects and engineers, it was determined that Calypso Tower lll received minimal amounts of damage compared to other areas in the Panhandle, and the structural integrity was deemed safe for its crew to return to work. This week, the team started pouring concrete on the 22nd floor.

“Our thoughts and prayers are with those still recovering from Hurricane Michael,” said Thomas Johnson, owner of Calypso Tower lll. “We plan to help put people back to work at the 250-unit Calypso Tower III, a project we are proud to say will sustain an estimated 403 jobs for locals, create $29.3 million in income for the area and $5.5 million in tax and other revenue in just one year as we complete construction.”

The additional, annual recurring impact of ongoing operation and maintenance of the Calypso Tower III will create an estimated $49.7 million in local income, $3.7 million in taxes and other revenue and 44 local jobs.

“Panama City Beach was fortunate to sustain minimal damage from Hurricane Michael,” said Kristopher McLane, president and CEO of the Panama City Beach Chamber of Commerce. “Now more than ever, our city will be an important resource to help our community and neighbors to the east. Very soon we look forward to once again welcoming back visitors to our beautiful destination and having the new Calypso Tower III open to all.”

To assist with the relief efforts for Hurricane Michael, the team at Calypso Tower lll has organized an open house and donation drive for Thursday, Nov. 8. from 4 – 6 p.m. The public is encouraged to bring items of need to the sales office at 15900 Front Beach Road to suite 102. The office will also be accepting drop-off donations on Friday, Nov. 9 during normal business hours. A partial list of those items can also be found on the company’s Facebook page.

“We know there are a lot of individuals still recovering from this Category 4 storm, which is why we wanted to put together an event to assist those that still need aid during this trying time,” said Johnson.